Periodic sharing meeting (in-person + virtual) entitled “Reconstruction and Rehabilitation of Private houses” was organized at NDRRMA hall by NDRRMA and supported by DPNet-Nepal under USAID/Tayar Nepal project. Mr. Anil Pokhrel, Chief Executive of NDRRMA chaired the program, whereas Mr. Surya Bahadur Thapa, Chairperson of DPNet-Nepal shared the welcome remarks and objectives of the program. He shared about the current loss due to the post monsoon disaster. He also shared about the need of recovery for the damage caused by the floods to the farmer. He appreciated the coordination by NDRRMA for this program and thanked everyone for participation and said that this program will provide way forward to effectively conduct reconstruction and rehabilitation. Altogether 231 people joined the event virtually whereas, 27 were present in person.

Major Highlights
Dr. Dijan Bhattarai, Under Secretary, NDRRMA delivered presentation about the Guideline for the Reconstruction and Rehabilitation of Private houses after Monsoon Disaster and progress updates about the subsidies provided till date. His presentation was started with the introduction of the NDRMMA and shared about the major provisions of the shared Guideline, role of Local Level and district administrative office for receiving the subsidy amount of the beneficiary, and progress. The Guideline was approved as per the clause 6 of the DRR&M Act on 2077/09/26 and this Guideline will only include the monsoon disaster affected people after monsoon disasters of 2077-02-30. He shared about the Guideline including the identification of beneficiary, amendment of the subsidy agreement, use of disaster technology, risk group, livelihood programs, fund management. The financial cost will be the concurrent responsibility of all tiers of Government, where 50% or more will be the responsibility of the Federal Government, 30% by Province Government and 20% by the Metropolitan and Sub-Metropolitan city, 15% by the Municipality and 10% by the Rural Municipality. The provision states that the beneficiary cannot receive repeated facility. Regarding the role of non governmental organizations, the working procedure is being developed.

The program was fruitful in sharing the Provisions about the Guideline which helped in making clarity to the Local Level for selecting the right holders and disbursing the money for relief and reconstruction.

Major Concerns
· Municipalities have shared the name list, but we haven’t received the approval till date for translocation of settlement.
· We have scenario like landslide is behind the house, but the house is not damaged, so how can we exclude such from the beneficiary list? The guideline states that one house for reconstruction, it’s better to state suitable house for living. This needs to be addressed.
· The structure at NDRRMA has been leading the DM at National Level, but unless we are able to extend the structure in district level it’s difficult to coordinate
· How can we resolve the issue of damage of paddy or what type of relief we can provide?

Closing
Mr. Anil Pokhrel, Executive Chief of NDRRMA shared that after the establishment of NDRRMA in year one we formulated monsoon preparedness plan, but last year due to landslide we face unexpected damage, we always considered monsoon preparedness plan only focusing flood. We were unable to understand about the landslide, 117 people lost their live in last 5 days due to unexpected disaster. So emphasized in considering landslides as well as flood in the preparedness plan. He further said that, NDRRMA is the forum to implement Guideline and the decision is made  by the National DRRM council. We didn’t have the tool or methodology to deal with the flood and landslides. The NDRRMA along with the NRA jointly formed a Committee, NRA guided us to make the Guideline for the Reconstruction and Rehabilitation of Private houses after Monsoon contextual. The guiding principle of this guideline is no human should loss life due to untimely death. No people should live in open sky without the roof.

Similarly, he added that NDRRMA should only be a medium for financial and technical support and the Local Level should implement the provisions as per the Guideline. We haven’t thought about establishing the unit of NDRRMA and our responsibility is to strengthen the Local Level. While developing the preparedness plan we have not only considered the monsoon disasters however considering the suggestion of the Ministry of Finance we are limited only to flood and landslides. Unless we translocate the house in high risk zone, we won’t be successful, we need to incentivize and promote integrated settlement. The feedback provided by participants will be considered for further improvement. Our responsibility is to transfer the unsafe settlement in safe place. Furthermore, he said that NDRRMA can only provide NPR. 15,000-20,000 support as a relief, but we cannot provide full relief to farmers who have lost paddy in field. He also shared that the Prime Minister has suggested to conduct damage assessment and then Ministry of Agriculture and Development will decide what amount of relief should be provided. NPR. 1 Arab will be allocated from DM fund as per the decision of DM Executive Committee and the money will be disbursed.

At the end he thanked everyone and said that, together with NPDRR, DPNet we will organize such programs in future. 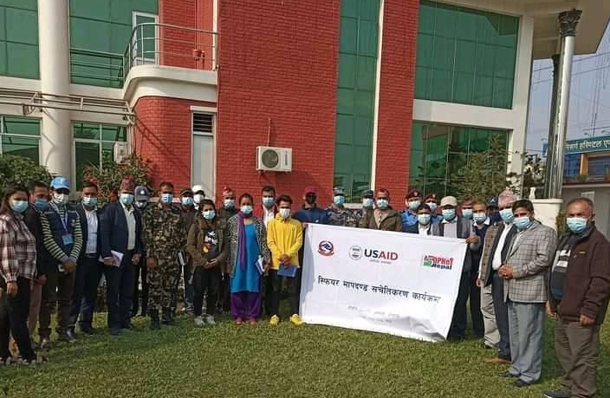 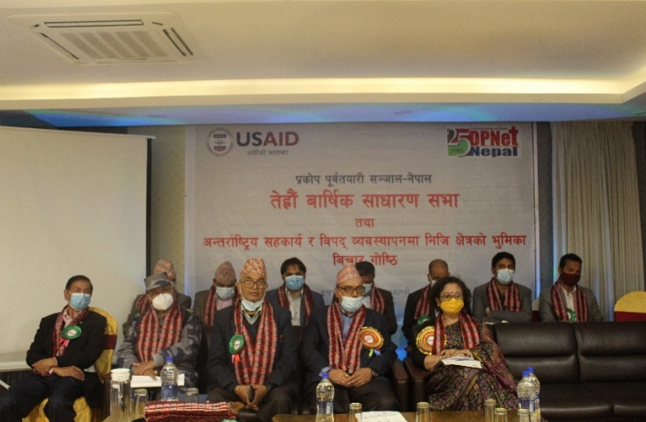 Interaction program on the Role of the Private Sector in International Coordination and Disaster Management.